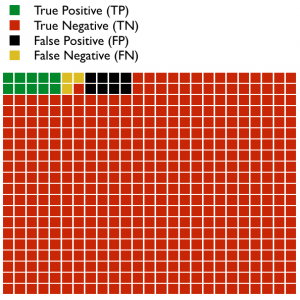 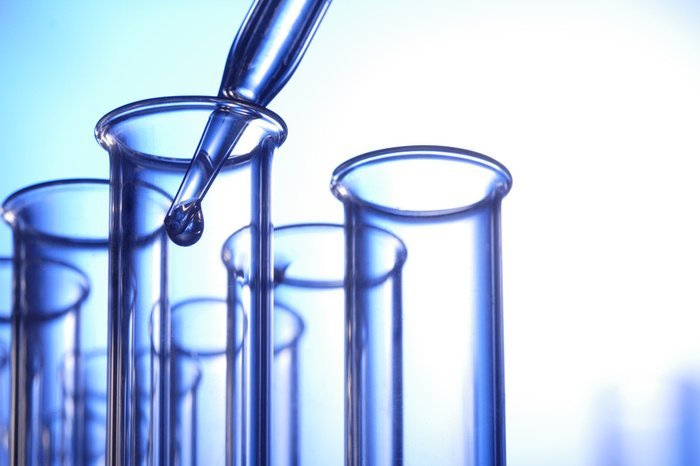 Imagine we design a test to detect a disease. In the graph below are 500 patients. 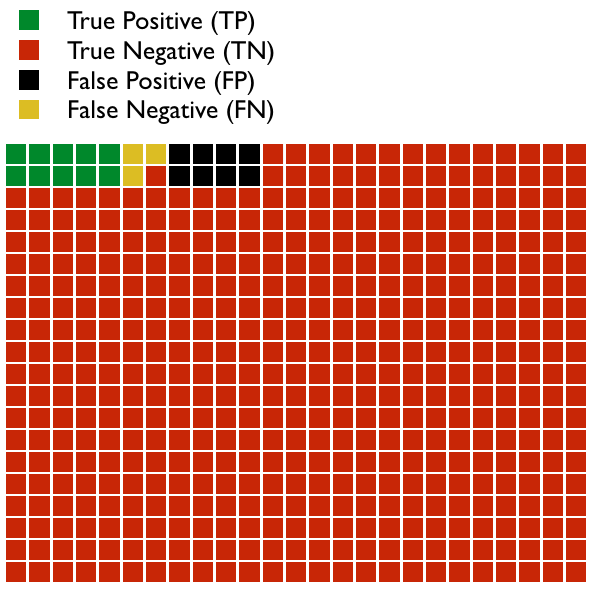 We can talk about how well our test works in a variety of different ways. Some of these terms are mistakenly interchanged and can be grossly misinterpreted if you don’t understand them correctly. Let’s look at each briefly (please don’t get overwhelmed by the math, and if you do, skip to the end and read the take away points):

Note: The popular mnemonics SPIN and SNOUT that med students use to remember specificity and sensitivity are misleading. SPIN states that a highly SPecific test (when positive) rules IN a disease, while SNOUT states that a highly SeNsitive test, when negative, rules OUT a disease. This is misleading because both sensitivity and specificity influence the utility of a test to predict or exclude a disease, as we will see next.

The most useful characteristics, clinically, of the test that we have learned about so far are the PPV and the NPV. These tell us what we need to know when the probability of the disease is equal to the prevalence of the disease in our study. But, unfortunately, they do not tell us how the test will perform in the real world. Clinically, when we order a test, the questions we should ask ourselves are, first, How likely is it that my patient has the disease? and, secondly, after the test result comes back, How likely is it that my patient has the disease now that I know the result of the test? These questions relate to the pre-test probability and the post-test probability. This process is the fundamental process that should be utilized when making clinical and diagnostic decisions, and is part of what we refer to as Bayesian Inference.

How do we determine the pre-test probability?

How do we determine the post-test probability?

Here is the vast importance of Bayesian Inference in clinical reasoning: The same test, with the same performance characteristics, has two entirely different meanings (post-test probabilities) when applied to patients with different pre-test probabilities.

When tests are arbitrarily applied to patients without knowledge of the pre-test probabilities of the condition being test for, then serious diagnostic mistakes happen. For example, ordering a screening CBC on an asymptomatic patient; if the test reveals some abnormality, it will be very unlikely that the result has any clinical meaning. Tests perform differently when applied to different populations or to patients with different presentations.

I have found that clinicians struggle with this idea almost more than any other concept in medicine. It seems so non-intuitive. Let me try an example:

Imagine that we develop a test to determine if a man is a hipster or not. Our test is, “Is he a white male with a full, thick beard?” We determine the sensitivity and specificity for this by sampling 10,000 men randomly across the country. We find that our test is 85% sensitive and 90% specific for being a hipster. From this, we can determine PPV and NPV and all of the other stats we have looked at so far. But we need to use this test clinically and understand how to interpret a positive result. Will the post-test probability for this test be the same if we apply it at a Starbucks in Seattle as compared to a bar at a lumberjack camp outside of Juneau, Alaska? Clearly not. This reflects the fact that, although we can determine a true prevalence of being a hipster, nevertheless hipsters are not distributed equally throughout America. We do not use tests in a vacuum. We use them with some prior knowledge and that prior knowledge (pre-test probability) affects the test’s meaning.