One of the great limitations of physical exam is that many (if not most providers) don’t do it very well. I have previously recommended the Stanford 25 as an excellent resource to enhance physical exam skills. In the case of clinical breast exam (CBE), the literature has been increasingly unkind to this stalwart of gynecologic practice. The American Cancer Society questions the value of CBE alone to detect worrisome lesions, though it may serve a role in reducing the number of false positives associated with mammography. In 2015, they stopped recommending that CBE be performed at all, which is in line with recommendations from the US Preventative Task Force Service.

Thus, clinical breast exam may be going the way of self-breast exam (SBE). SBE hasn’t been widely recommend in nearly 20 years; it has never been shown to decrease mortality from breast cancer, but it has been associated with an increased number of patient complaints stemming from benign issues – and an increased number of biopsies and interventions to go along with these complaints. From this perspective, SBE (in low risk women) is a net harm: increased interventions and risks with no betterment in outcomes.

Obviously, a major problem with SBE is that it is performed by incompetent examiners. Women may know their own breasts very well, but they are usually ill-prepared for performing the proper techniques and understanding how their breasts change with time of life, pregnancy, weight changes, hormonal status, etc. It is hardly surprising that SBE is net harmful. If we gave people stethoscopes and told them to listen to their own hearts for murmurs, we wouldn’t be surprised if this were also an ineffective strategy. But should cardiologists not listen to hearts?

I am suggesting that CBE may have shown poor utility in clinical studies primary because most providers are not doing the exam correctly. We don’t have studies that control for the methods used for CBE and the effect of appropriately-performed CBE on mortality; we do have evidence that CBE reduces false positive discoveries when used in conjunction with mammography or MRI and we have evidence that CBE may improve patient compliance with mammography. We have evidence that appropriate technique for CBE can greatly increase the sensitivity for smaller lesions. We also know that CBE is useful for symptomatic patients and perhaps for high-risk patients. In order to maximize these benefits, we must be as good as we can be as CBE. Perhaps with more widespread use of good technique, CBE might show promise as a primary screening tool again in average risk women, particularly in the coming era of fewer screening mammograms and later onset of mammography (age 50 and up).

Remember, the goal of mammography is to detect lesions before they are palpable, while the goal of CBE is to detect early, palpable lesions. So studies which compare the efficacy of CBE to mammography will never show that CBE is of value, though it may produce fewer false positives (less over-diagnosis). However, if mammography becomes routine starting at age 50 (as opposed to age 40), then CBE (done well) may show value in detecting small lesions that are not otherwise detected since mammography won’t be routinely used in these populations. CBE is 58.8% sensitive and 93.4% specific for detecting breast cancer; this may not be good compared to mammography but it is excellence compared to no screening at all. While it is true that no current data shows a mortality benefit for CBE, it is also true that no current study shows a mortality benefit for mammography.

1. Cover all of the tissue systematically (use vertical stripes).

The breast is a comma shaped organ with its tail extending upwards into the axilla. All of the breast tissue needs to be systematically palpated. Popular methods for this include circles of increasing size, starting from the nipple and moving outward; wedges radiating to or from the nipple in different radial directions, and vertical stripes (or horizontal stripes, the ‘lawn mower method’). Multiple studies have shown that the vertical stripes method is at least 50% more sensitive than other methods and leads to more consistent coverage of breast tissue. The data is very clear that this the only acceptable method for SBE and CBE.

2. Use the pads of three fingers, one hand at at time. 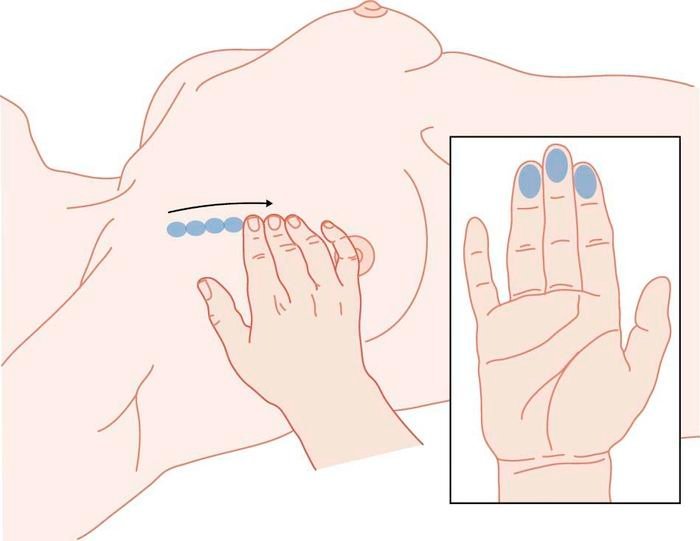 The most sensitive parts of the fingers are the pads of the digits, not the tips. As in the drawing above, the pads of three fingers should be used for palpation. Many providers will use the tips of the fingers, pushing down in alternating motions (as if typing or playing the piano); this method is essentially worthless to detect small tumors (less than 1 cm). Additionally, using only one hand at time enhances your brain’s ability to process all of this sensory information accurately. While bimanual haptic perception (using both hands) is beneficial for identifying large objects (cylinders, curved objects, horses, etc.), this is not the case for fine touch. There is integration of sensory information from digits which are from the same somatosensory map (for example, the middle three fingers) but not from different maps (for example, the thumb and little finger or fingers from two different hands) for fine touch. So use the pads of the middle three fingers and only use one hand at a time (of course you may need the other hand for positioning of a large breast, but not for simultaneous palpation).

The best way to feel a nodule underlying superficial layers of skin and fat is to make circular motions (circumscribing a radius about the size of a dime) with your fingers. This will make skin and fat layers roll over the lump and the lump will stand out. Simple downward compression is far less effective at detecting an underlying mass. Multiples studies have shown that small circular motions greatly enhance palpation technique for breast exam compared to any other method.

4. Use three levels of pressure (compression).

Because tumors may be relatively superficial just under the skin, very deep next to the chest wall, or anywhere in between, then compression of the breast tissue in three specific levels is appropriate for most breasts. A deep tumor may not “roll” under the fingers with light pressure, and a superficial tumor may not “roll” under the fingers with too firm (deep) pressure. Combined with a circular motion, these three levels of palpation can be executed in one successive movement: after placing the three fingers, one rotation with light pressure, then intermediate pressure, then full pressure. Simply move your hand over with about a finger’s breadth of overlap and repeat.

Don’t routinely attempt to express fluid from the nipples. This painful maneuver has no clinical utility in asymptomatic women and produces a large number of false positive (most women who have had children can be made to discharge fluid).

Don’t forget about palpation of axillary and clavicular lymph nodes and inspection for nipple symmetry, etc. These elements of the breast exam are most important for women in whom you suspect a mass or who are otherwise high-risk.

Don’t worry about timing. Studies are mixed about how long it should take to perform an exam, and it clearly will vary considerably based upon breast size and the complexity of what is being palpated. Still, if a whole breast exam takes 20-3o seconds, you probably are not using these techniques.

These principles are the core of the MammaCare breast examination method and have been shown to greatly enhance the ability of CBE to detect small lumps compared to other methods. A large body of clinical research exists showing the superiority of these combined methods. Only a small percentage of providers utilize these four essential elements, and therefore the efficacy of CBE is greatly diluted. CBE should become more important in the years to come as women more often do not receive mammography until age 40, and hopefully future studies will focus on the utility of CBE with appropriately employed techniques.

Is Hydration Useful for the Management of Oligohydramnios? Or Should We Even Care?