I haven’t used a left lateral tilt during Cesarean delivery in years. There has never been any robust scientific data that tilting the table or tilting the mother with a rolled blanket or pillow to approximately 15° has any effect on fetal outcomes. Still, the practice is widespread and most practitioners believe it be of value. It has been included in many practice standards, albeit without evidence. But finally, a randomized controlled trial was published last month which analyzed this practice. The authors found no differences in fetal base excess or pH between the women who were tilted and those not tilted. Studies over the years have shown an increase in maternal cardiac venous return, but this surrogate maker has simply never been shown to translate into fetal benefit. We must be careful creating false de facto standards of care without evidence. The lateral tilt should be abandoned until fetal benefit is demonstrated.

Hopefully you already don’t make a bladder flap at the time of Cesarean delivery. The routine creation of a bladder flap lengthens the time of surgery, the time from start to delivery of the baby, and doesn’t decrease the risk of bladder injury or other complications. This archaic practice dates back to a time before antibiotics, and was originally intended to help create a retroperitoneal tunnel that would aid in isolation of vaginal flora from spreading around the peritoneal cavity, or to at least create a surgical flap that could be repaired over the uterine incision to make it and any potential leakage from the uterus retroperitonealized. This approach was made popular and dogmatized by Krönig in the early 20th Century, and worked best with a classical uterine incision (which would lie perpendicular to the peritoneal incision). The bladder flap was never shown to facilitate protection of the bladder from injury, and may, in fact, make injury more likely to occur by encouraging surgeons to make the hysterotomy too low in cases of deep arrest by removing and distorting visual landmarks. Now, a new study from 2017  also shows that women who receive a bladder flap report higher rates of urinary bother symptoms at 6-8 weeks postpartum, placing yet another nail in the coffin. There just is no reason to make one; stop doing it!

Break her water (if she wants)

A lot of dogma surrounds the practice of amniotomy during labor. Clinical studies are contradictory about the benefits and risks of rupturing membranes, with some showing shorter labors but with higher rates of infection and others showing no benefits. Well-controlled studies have been lacking for decades. The result is that some obstetricians swear by amniotomy while others ridicule it.

A new study which will be published next month randomized 288 women in spontaneous labor to amniotomy or no amniotomy between 3-5 cm dilation, while controlling for other variables. The women with ruptured membranes had an average labor of 235 minutes compared to 364 minutes for the women who did not get their membranes ruptured, a difference of just over two hours. The Cesarean delivery rate in the amniotomy group was 2.8% compared to 6.2% in the control group, though the study wasn’t powered sufficiently to declare this statistically significant. This is not the first well-designed study to show a difference. Here’s one from 1993, which also showed 2 hours+ shorter labors with amniotomy. The well-designed studies are consistent in this finding. Amniotomy may not reduce the rate of Cesarean delivery, but it does make labor faster, and some women may find that appealing.

A 2014 study in the Gray Journal by Marrs et al. compared a transverse skin incision to a vertical skin incision at the time of Cesarean delivery. Surprisingly, they concluded that the odds of wound complications were lower among women with a vertical skin incision after performing a multivariate analysis. This didn’t quite make sense: in the univariate analysis, the risk of wound complications was lower in women with a transverse incision and this idea was in keeping with most of the rest of the literature in this regard. Fortunately, I wasn’t the only one who thought this study was flawed. Thankfully, it was retracted this month after it was discovered that an error was made in the multivariate analysis. It actually concluded the opposite of what was published. The transverse incision is indeed the safer choice for obese women.

Yes, bigger incisions do cause hernias

It has been commonly rumored through marketing efforts that the larger umbilical incisions associated with single-port laparoscopic surgery do not lead to a higher rate of incisional hernias compared to the smaller, 5 mm umbilical incisions associated with traditional multi-port laparoscopic surgery. This counter-intuitive finding is based on weak evidence which has been augmented through the marketing departments of a myriad of companies involved in selling the expensive equipment needed for single-incision surgery.

However, a new review published last month shows that the intuition that a bigger incision leads to more hernias is correct. Among 908 women undergoing single-incision gynecologic surgery (mostly hysterectomy), 5.5% eventually developed an incisional hernia. The rate was as high as 23% among high-risk groups (women with obesity, diabetes, or hypertension). Interestingly, the timing of hernia development was an average of 570 days, which shows why shorter-term studies often fail to detect the increased risk of herniation, since most only follow the patients for a few months. The rate of hernia with traditional laparoscopic gynecologic surgery is thought to be far less than 1% (about 21 per 100,000).

Don’t admit for labor too early

A 2016 study examined the relationship between cervical dilation at the time of admission for labor and the Cesarean delivery rate among nulliparous women. Patients who were admitted in labor and were less than 4 cm dilated had a significantly higher risk of eventual Cesarean delivery (18% vs 4%) compared to women who were more dilated. This data is consistent with studies which previously examined active labor management (the Dublin method), where women were not offered admission for labor unless they were at least 4 cm dilated. Too often, women in early latent labor are admitted and then augmented with resultant labor dystocia. A woman who presents and changes from, say, 2 to 3 cm may not progress beyond that dilation for some time; she is likely not yet in active labor. Admitting her too early and then augmenting her when she fails to progress may quadruple her risk of a primary Cesarean delivery.

This same observation was made among multiparous women in another 2016 study. In this case, multiparous women admitted before 6 cm dilation had an 11% chance of eventual Cesarean delivery compared to women admitted at 6 cm or more who had only a 2.5% risk of eventual Cesarean delivery. A multiparous woman who presents at 4-5 cm and contracting regularly is often admitted without evidence of cervical change and assumed to be in active labor, though she too may still be in latent labor or not in labor at all. The concept that 4 cm equals active labor must be thoroughly rooted out of obstetrical thinking and management protocols. A 2016 Canadian review of indications for Cesarean delivery among 392,025 nulliparous women found that among those who underwent Cesarean for labor dystocia, 13.6% were less than 4 cm dilated and 29.5% did not receive oxytocin to treat the dystocia prior to undergoing Cesarean delivery. About 1 in 4 women were 6 cm dilated or less, and therefore not in active labor by today’s standards. We have to shift our mindset completely about the definition of active labor.

Stop implying that sex can put a woman into labor

There are a lot of anecdotes (aka myths) that pervade Obstetric practice and thought. Be careful how your advice can cause these myths to persist. For example, if a miserable 40-weeks pregnant woman asks what she can do to help her go into labor, her doc might say something like, “Go home and have sex.” Since semen contains prostaglandins, and since we use prostaglandins to induce labor, many people believe that there is some value in sex in stimulating labor, even though there has never been evidence of this. Thankfully, there is now a randomized controlled trial from 2014  which analyzed this question. The authors found no difference in timing of delivery, vaginal delivery rate, or rate of spontaneous delivery when subjects were randomized to sex or no sex. Sex is fun (citation needed?), but it doesn’t put a woman into labor. When this myth is perpetuated, it makes women scared to have sex earlier in pregnancy and in some cases makes women feel guilty who have had a miscarriage or a preterm birth, feeling that they are somehow responsible for the outcome because they had sex. 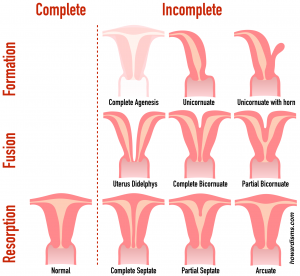