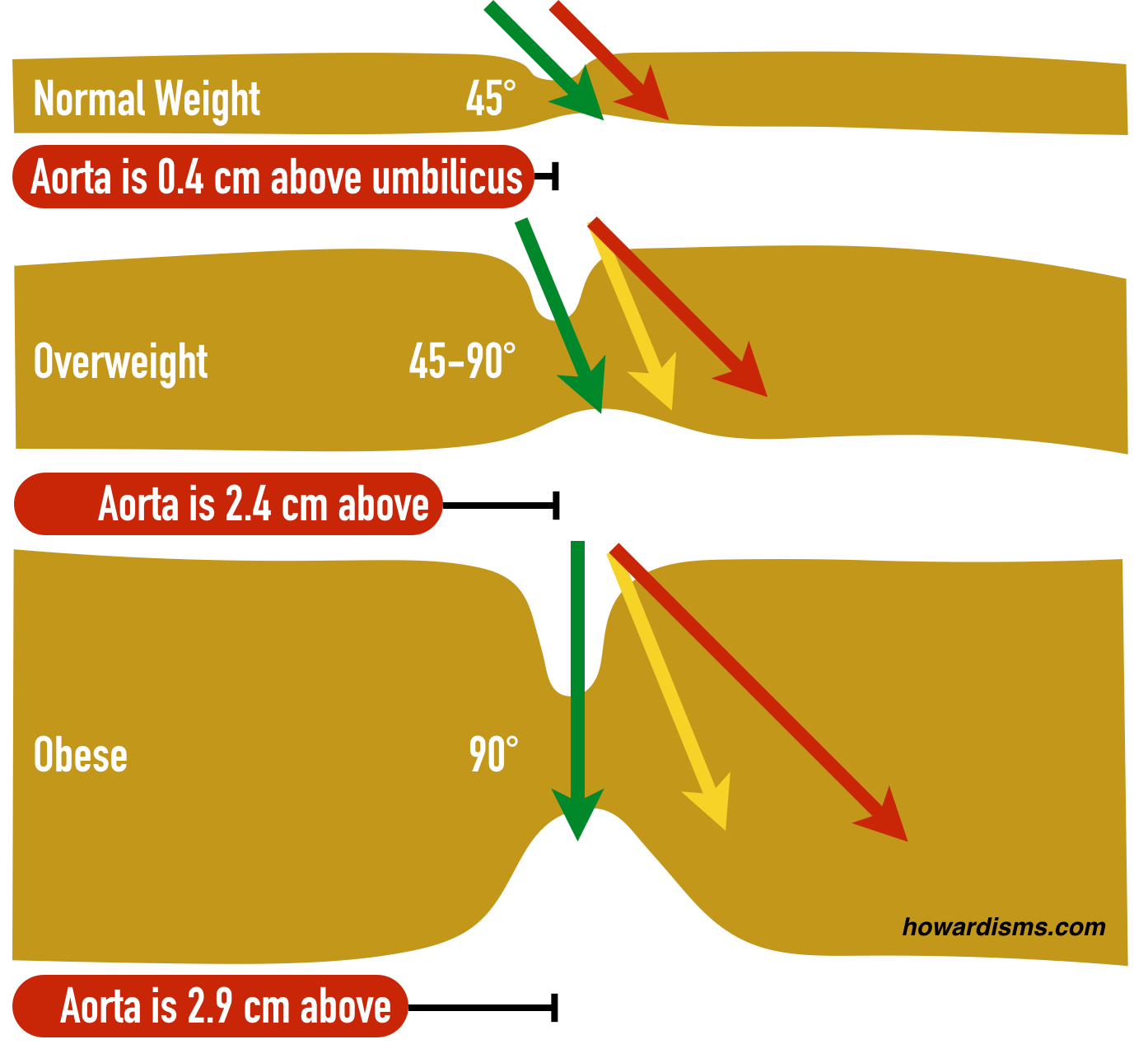 1. Use a direct entry optical trocar, preferably one that insufflates upon immediate perforation of the peritoneum.

For most surgeons who want to improve safety at the time of initial laparoscopic entry, the focus is on the method of entry. The most common choices are the open or cut-down method (Hasson method), pre-insufflation with a Veress needle followed by trocar placement, or direct entry with or without an optical trocar.

The debate over which technique is best centers around two main types of injury: major vascular injury and bowel injury. Both types of injury are rare but dozens of studies, both prospective and retrospective, have been done to give us some numbers regarding the injury rate.

Molloy et al. performed a meta-analysis of 51 studies performed before the year 2000. They found the following rates of injury per 1000 cases:

These rates of injury are basically the same in the prospective studies as well. When patients were randomized prospectively to open vs the direct entry techniques (eliminating the selection bias for patients at high risk for bowel injury), the following rates were found per 1000 patients:

So, the direct entry is superior even in randomized trials.

Interestingly, virtually every vascular injury in the dozens of studies available occurred with Veress needle entry. Both open and direct entry techniques virtually eliminate the risk of major vascular injury. But the open technique, first described by Hasson in 1971, poses a relative risk of 2.6-fold for bowel injury as compared to the direct entry technique. The open technique was created to combat vascular injuries that were occurring at the time of Veress needle placement, not to reduce the risk of bowel injury. Today, unfortunately, many surgeons assume that it has the benefit of reducing bowel injuries, but this is not supported by evidence.

Modern direct entry trocars are optical trocars, which allow the surgeon to survey the layers of tissue during the entry. This should lead to a further reduction in injuries as well, particularly with trocars that insufflate as soon as the peritoneum is punctured. Direct entry also carries a lower risk of failed laparoscopy compared to use of the Veress needle, and failed entry dramatically increases the risk of visceral and vascular injuries, usually because the surgeon becomes more aggressive with the angle of insertion and depth while entry becomes more difficult due to preperitoneal insufflation. When three attempts or more are needed, half of cases suffer a complication ranging from extraperitoneal insufflation to omental, bowel, or vascular injuries.

There are some other advantages of direct entry:

The clear winner seems to be direct entry laparoscopy with an optical trocar. This contradicts years of traditional teaching and what purports to be common sense regarding avoidance of major injuries at the time of initial port placement. Unfortunately, what the evidence holds out as the safest option is also the least used, with only about 10% of surgeons/gynecologists routinely using this technique.

2. Place your incision deep in the umbilicus.

The base of the umbilicus is the thinnest entry point into the peritoneal cavity. Traditionally, laparoscopic incisions have been placed infra-umbilically for ease of closure and ease of dissection. But one advantage of using direct optical entry is that dissection and closure with suture are unnecessary. This allows placement of the initial incision in the ideal place, which is at the base of the umbilicus. The abdominal wall is thinnest at this point and creates the ideal geometry for successful placement. 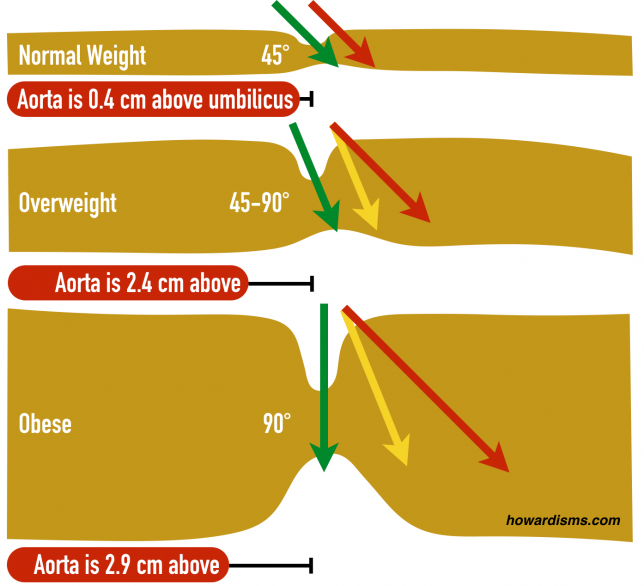 In the picture above, the green arrow represents the ideal trocar placement location and angle for each body type. A normal length trocar works usually even for very obese patients as long as the correct location is being used. When the trocar is placed below the umbilicus or at the wrong angle (yellow and red arrows), then the distance to be traversed increases dramatically and the so does the risk of failed laparoscopy.

3. Know where the bifurcation of the aorta is in relationship to the umbilicus and use the correct entry angle for the patient’s size.

Also, make sure that the angle of insertion is parallel to the long axis of the body; even slight lateral angulation can lead to the trocar damaging the common iliac or internal iliac vessels (green is good, yellow is bad). 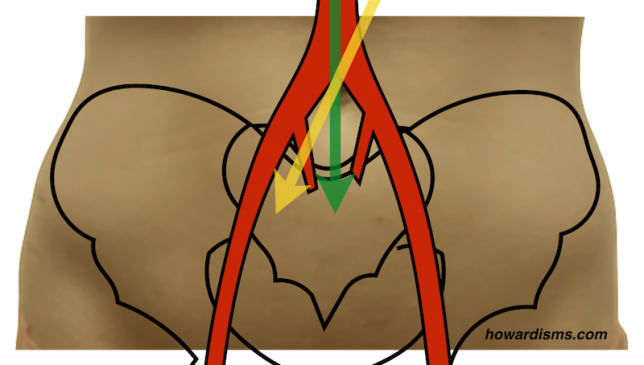 4. Use Palmer’s point if her risk of umbilical adhesions is high.

Most bowel injuries happen because of adhesions to the abdominal wall near the base of the umbilicus. In fact, more than half of bowel injuries with direct entry occur in patients with previous vertical abdominal laparotomy incisions or multiple previous infra- or intra-umbilical incisions. Use of an alternative site, such as Palmer’s point, 3 cm below the costal margin on the left side at the midclavicular line, would theoretically reduce the rate of bowel injury with the direct entry method by half. Consider this location for patients with risk factors for umbilical adhesions, chiefly a prior vertical incision or 3 or more prior umbilical punctures. But remember, don’t use Palmer’s point if the patient has had prior gastric surgery. Always decompress the stomach first and palpate for splenomegaly.

Make sure your skin incision is big enough; you don’t need to fight skin friction on the way in. Use a back-and-forth twisting motion with the trocar to break the skin friction. Elevate the abdominal wall below the umbilicus with your hand or use towel clamps at the umbilicus if necessary. Don’t place the patient in Trendelenberg’s position while making your initial puncture; this will shift the geometry of the umbilicus-to-aortic bifurcation in an unfavorable way and make your needed angle of entry much more acute. 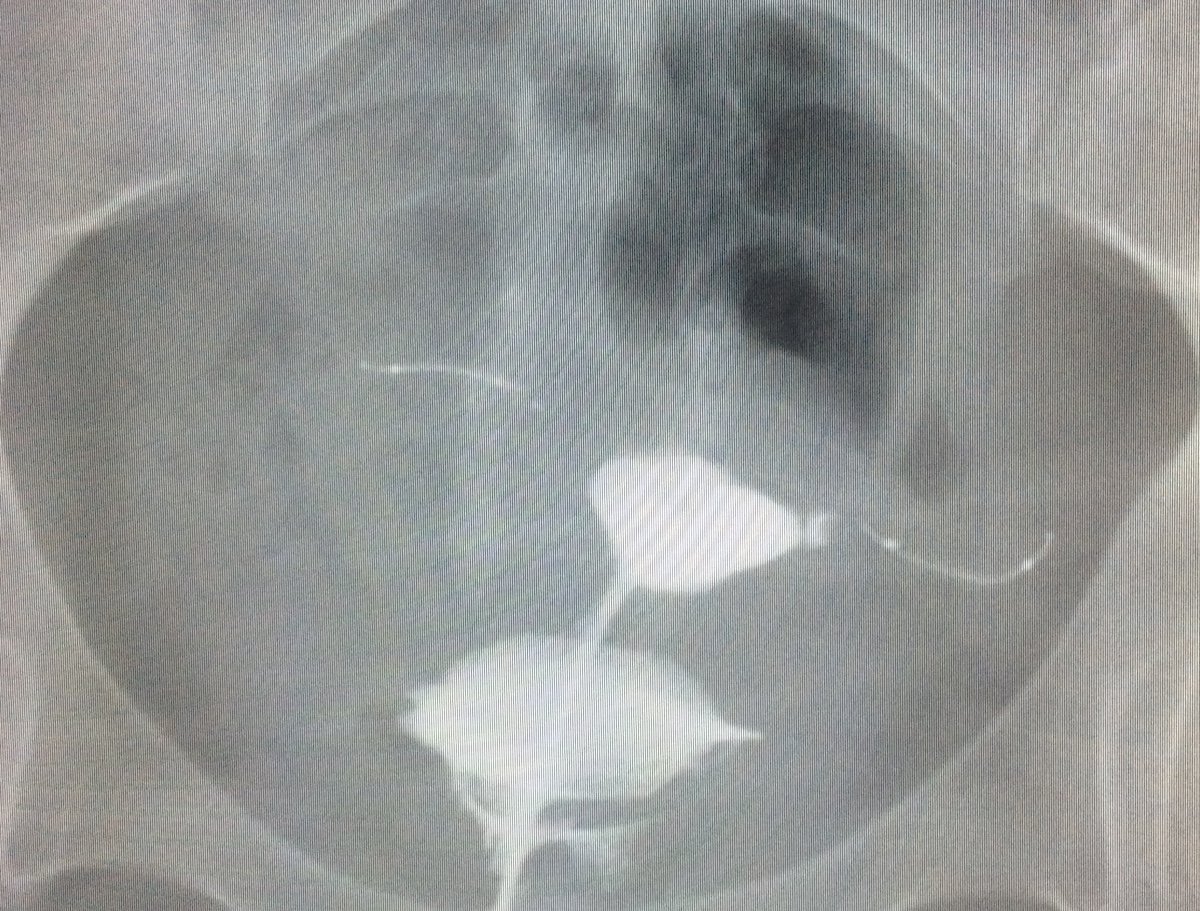